Time to Change Ekiti State for Better is Now

Ekiti State is bleeding and requires urgent remedy. According to the National Bureau of Statistics (NBS), youth unemployment rate in Ekiti State is about 32.2% of the labour force and misery index is above national average. With the current budget of N100.8 billion, we have the least budgetary drive in the entire 36 States despite our huge natural and human resources, which suggests that the current government lacks the creative efforts to raise revenue for the development of the State.

Sadly too, many salaries, allowances and gratuities of hardworking workforce from the State are not being paid as expected.

Insecurity is overwhelming in the State and aggressively debasing the Centre of Gravity of our economy, particularly in the areas of agriculture and tourism. Because of the incessant insecurity, most of our farmers are sacked from their farms and tourism is near collapse. The State total debt according to Budget Management Office is now 123.88b naira, one of the highest in the country. Worst still, it is shocking and irresponsible to note that this current regime structured an external debt for 25 years maturity without leaving any savings as sovereign wealth for future generation of the people of Ekiti State.

There is the need to fix our cherished State urgently by a capable and tested leader who truly cares about the people of Ekiti and will always protect their interest. We do not need leaders who only want to own the fame of Office and spread the blame on the citizens. We need a leader who knows that winning an election only suggests that the entire Ekiti people have only surrendered their powers into the hands of the leadership in trust to be used strictly to foster their interests in all circumstances. This is the leadership principle that l held in high esteem before and I will do so again if elected.
Governorship election for Ekiti State is scheduled for 18 June 2022.

You will recall that those who brought the State to this level of collapse own the structures of the major parties in the State with the aim of holding on to power through their surrogates. It is almost impossible to win any of the primary tickets under these parties if you do not bow to them. Unfortunately, Ekiti people have given them 2 tenures each to prove their abilities, which they have failed and the only way to continue to cover up for their failures is to hold on to power through their surrogates, who will be kept under their strong grip to cover up for their failed policies. The time to say no is now and we must rise up and join hands to secure our freedom together. This is a clarion call.
I am with every sense of humility and responsibility offering myself to serve the people of Ekiti State with outstanding results. I paid salaries as at when due, constructed roads more than all the other governors put together and never owed any debt. According to the 2009 human development index of the UNDP, Ekiti State was ranked 10th out of the 36 States even though the State was 34th in monthly Federal Statutory Allocation and 24th in GDP per capital.This clearly suggests how prudent and effective we were in utilizing the monthly lean allocation under my watch. Interestingly too, Ekiti State was ranked 1st in life expectancy rate in the country. Within the period, life to ordinary people of Ekiti State was meaningful and prosperous. Above all, l am proud, l did not steal your money. I served you with passion and with all sense of integrity.

I am ready to serve Ekiti State again but l must first win election on the 18th of June 2022. I need all votes and support.

l and other prominent leaders of like minds have moved to Social Democratic Party (SDP) to put an end to the impunity of those who have failed and want to continue to hold this state to ransom through their proxies. To power our campaigns to dethrone these politicians and their proxies require huge funds since we are just projecting a new party. We must work assiduously, smart and be supportive in the coming election to avoid falling prey of their money politics. This time, Ekiti people must own back their State and entrench decency, probity and accountability so that we can once again make excellence our culture in Ekiti State.

We are convinced we will defeat them at the polls and return the State to the citizens of Ekiti State but we need you and your support to get this job done.

We have launched a crowd-funding campaign to help us raise funds to prosecute our campaign to a successful outcome. The company driving the process for us is Quickraiz and the link, https://quickraiz.com/campaign/323672-support-segun-oni-for-ekiti-2022 will be displayed on our website and social media handles. l know this time is hard. I feel it too. We must unite to win this coming election.

Please assist us generously, consider this a sacrifice we must bear to make Ekiti great.

Allowing the failed politicians to continue to have their ways will only bring pains with hopelessness, which is more dangerous even to generations yet unborn. 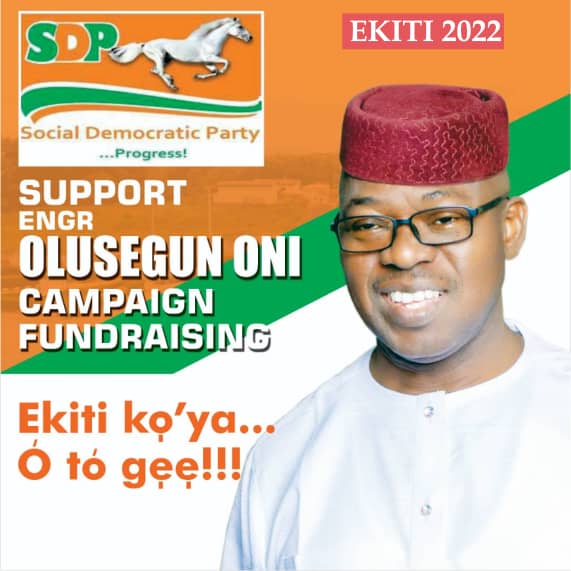